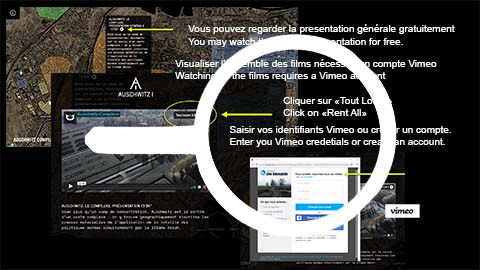 The « general presentation » is free, as is navigation in the architecture of the site. Access to the entire platform is available for hire for a period of one week at a price of 4.99 euros.

A multimedia platform made up of 45 video modules included in a navigation flowchart, auschwitz-complex.com offers a virtual tour of sites representative of the operation of the Nazi project implemented in the vicinity of Auschwitz:
Besides the three main camps, Auschwitz I concentration camp, Auschwitz II Birkenau concentration camp, transit, but also the killing center and Auschwitz III Monowitz labor camp, we find in this perimeter called by the Nazis « zone of » interest ”several factories, mines, agricultural farms, annexed camps, research centers, a vast town-planning project and many other installations which take part in the operation of this unit. For its designers, Auschwitz is a first large-scale pilot operation, aimed at the territorial development of Central Europe annexed to the Great Reich.

Under the name “Auschwitz” hides in reality a vast complex scattered over a considerable territory whose traces are still visible and allow the visitor to lead to the heart of the original places of the events. The main idea of ​​this platform is to offer a legal framework for the facts described, a legal topology and a legal architecture, like a forensic medicine that establishes the facts of a crime.

A satellite photo covering more than 40 km2 serves as an interface, and it is from this that navigation is organized in the « area of ​​interest », through the 45 clips of this platform:

2. Auschwitz I the main camp has a presentation of this site and 7 other modules inside this camp

4. The industrial sector is present with 3 complementary modules:

– the Janina mine
– the Brzeszcze and Jawisowitz mine
– the Siemens factory

6. Biomedical research, a module: the Hygiene Institute in Rajsko.

7. The comprehensive town planning project for Auschwitz, a module, presents the site of the new district built for the staff of IG Farbenindustrie, the Siedlung.

8. Auschwitz II Birkenau is presented by 22 modules, 14 of which relate to the concentration camp area with its 10 separate camps, 7 modules relate to industrial killing facilities and a general presentation.

9. A module is dedicated specifically to unfinished projects, 2 others mention them.

45 modules between 2 and 14 minutes framed by a simple and intuitive organization chart embellished with 3D graphics offers the visitor several types of navigation: geographic continuity, thematic continuity or free navigation.

In addition to the 45 historical stories told by a narrator, 39 testimonies and quotes, also said “off” by performers, participate in the composition of this platform:
– 19 from the Nazis (including 13 from Commander Höss) validate the supporters of the Nazi project,
– 19 testimonies or quotes from the deportees (6 from Poles, 9 from Jews, 1 Gypsy, 3 testimonies from a French political deportee) and one from Franklin D. Roosevelt complete the assembly of the modules with the intention of honoring the memory of the all the victims sheltered from any memorial competition.
Several windows (« info », « modules », « bibliography », « credits ») offer tools for a global understanding of the content of this platform, including a « bonus » where the director, failing to be able to be exhaustive, expresses himself. on the bias of the project.