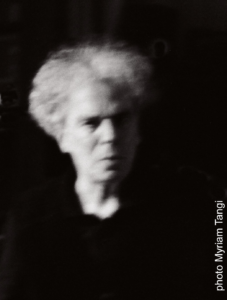 After the attack claimed by the « Islamic Jihad » against the International Festival of Jewish Cinema in Paris in 1985, an event that I had organized every year since 1981, the desire to turn the page was imposed on me. This decision was in part due to a detestable political environment which overwhelmed me with its challenges, but also I wanted to tackle new perspectives.

It seemed appropriate to me to withdraw from public action to turn to a more personal work, to limit my degree of exposure and to adopt a slower pace allowing me to face a new challenge that I sensed that it would take a long time to realize, very long, probably never quite finished.

The desire was to open a new garden, with specifications related to that of the peasant without time to rest, except that it was a question of growing cultural objects, ideas, scenarios, images. and sounds to tell stories, stories that have yet to be told, as my vision perceived them.

After working as a farmer in a kibbutz in the Negev, then becoming a builder of a school near Paris, I graduated as an architect from the Special School of Architecture. I was 40 years old when I directed my first film, Falkenau vision of the impossible, as an autodidact, with the benevolent assistance of Samuel Fuller. A passion for photography had led me, still very young, to bring out magical images late at night in my laboratory. It was a practice that allowed me to become one with the camera, I learned to show what I wanted to show, I learned to choose the frame and the light accordingly. I learned that the objective, and through it the technique, only takes on consistency when it gives life to the object placed in its field of vision, an object called to become a subject.But the cinematograph captures reality 24 times a second plus sound and makes the out-of-frame perceptible, attributes of capital importance if one wishes to promote an open perception of representation from a reality whose metamorphoses go beyond all fictions. This is what documentary cinema offers, both poetic and educational at the same time.

Author, director and producer of most of my work, it is important for me to best serve both the ideas developed and the people presented, the protagonists associated with my films. In our environment stunned by a constant flow of information, I tried to make sense, convinced that our understanding could be improved, and if we cannot change the world, it makes it more intelligible. This in itself is already a considerable « miracle ».

The filmography presented is representative of the range of my interests. However, I hope that beyond all the critical considerations that inevitably arise in any documentary, the viewer will discover, in echo, a personal aspect, which he will be the only one who can evaluate.